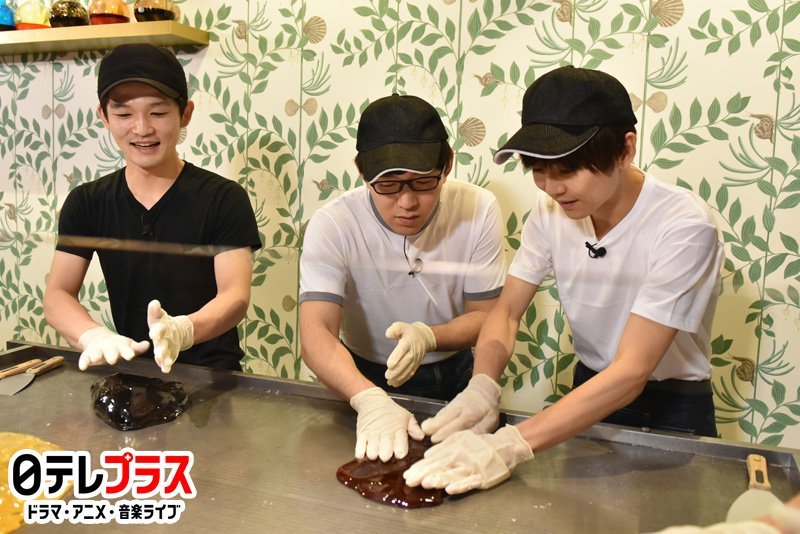 In Kaji100′s Episode 8 this time, Kaji Yuki is joined with Ono Yūki to challenge candy making! They visit Papabubble’s branch in Nakano to be guided by its owner to make an original Kaji100 candy. Approximately 1 hour was taken to finish building the original design Kaji came up with. During the process of making the candy, fun conversations fill the room due to Ono’s loquacity. The episode includes other mini-corners: The 10 things Ono Yūki wants to do; The Shōwa Games Kaji Yuki wants to play; The 100 menus Kaji Yuki wants to eat; The 100 things you want to ask Kaji Yuki.

Back from semi-hiatus but I’m sorry for the half-day delay! This episode was really fun to sub though, if anyone wants to see more of Kaji’s main character syndrome I’d recommend this episode (*´∀｀）I love these two’s chemistry.

Just to give a heads up that Ono Yuki and Kaji both love soccer so they used a few slight soccer references in their conversations this time, I’m sorry if the terms weren’t used correctly cause my only soccer knowledge is from Area no Kishi (-.-;) Other than that it’s just slight ones to Jojo no Kimyou na Bouken and SD Gundam Sangokuden in the opening introduction. Also, when they touch on the topic of alchemy, Ono clapped, referring to Fullmetal Alchemist (or perhaps something else I’m unaware of). In case some people haven’t watched the previous episodes of Kaji100, it’s good to note that Dobin Mushi is Kaji’s favourite food and that he’s been talking about it in almost every episode, hence the joke at 5:56 when he said “People might be thinking that we’re finally making dobin mushi!” At 20:39, in response to the sensei saying “The more you knead, the tastier the candy will become”, Kaji and Ono mention that they’ve heard it “somewhere,” and they were referring to a Japanese CM that follows the tune that goes “te-rette-re” ( テーレッテレー♪). They also mentioned Beyblade and B-Daman in the Shōwa games corner.