ー Thank you for your hard work at recording today. How do you feel?

Kaji: Every single episode, we never fail to take a long time recording thoroughly… It makes me realize how much love the director and the staff have for “Takagi-san.”

Takahashi: That’s true! It’s because we spend a lot of time here every week, it feels longer than a normal one-cour series.

ー Does the recording session take longer than other series?

Kaji: Yes, it might be rare for a recording session to last up till the very last minute. However, the recording isn’t taking a long time because it wasn’t done well, it’s because we are constantly exploring various patterns, “How do we exceed this?“, “How will the viewers enjoy this teasing even more?“, which is a wonderful spirit to have for a series.

Takahashi: I’m glad I wasn’t told that my performance was totally off (laughs)

Kaji: In truth, there might just be no wrong answer. Even from the mixer room (where the staff is at), we often receive many opinions from all kinds of people. I believe that those are the representation of each of their fetishes and fixations for this series. And we have the Takahashi-san who responds to those demands adequately!

Takahashi: It makes me really happy to hear that. I didn’t understand Takagi-san as a person at all at first… I’ve always been reading the manga from Nishikata’s perspective, and Takagi-san was portrayed in a way so that people cannot understand her, so it was difficult to find a clue to begin with.

ー During Episode 1’s recording, she was given an unreasonable instruction to “not have a conversation with Nishikata.”

Takahashi: Most likely, it only turned into “Takagi-san’s teasing” when that is matched together with the animation. It’s just that in Episode 1, I still couldn’t figure out how to digest that idea and make something out of it. Everyone guided me in exploring various patterns, and finally when we got up to around Episode 3-4, what I myself thought to be “like Takagi-san” was used as it is, and that made me a little happy.

“Dog!? You’ve been thinking that Nishikata is a dog!?”

ー Regarding how you arrived at an answer around Episode 3-4, was there a trigger or visualization that helped you with that?

Kaji: Dog!? You’ve been thinking that Nishikata is a dog!?

Takahashi: Dogs are, cute… personally speaking, okay? This isn’t about Takagi-san (laughs). For some reasons, I felt that it was too much like normal classmates’ interaction, so I tried to first catch what Nishikata is saying, then I’d twist it up in my own way and throw back whatever works to him. Or at least that’s the visualization I had, which sort of reminded me of a pet and its owner… (laughs)

Kaji: With all that’s said and done, she’s a “skilled teaser” after all. I bet she wouldn’t speak to you in the same dimension… (laughs). Especially in middle school, girls are way more mature than boys.

ー Was there anything you struggled with when voicing Nishikata?

Kaji: This is a story that orbits around Takagi-san as the center from Nishikata’s perspective, which is the reason why he has many monologues. The lines he exchange with Takagi-san, the lines he exchange with his friends, and also his inner thoughts… Having to express the differences in his tone, balancing between the comical and serious expressions, and also the nonchalance and reality in his reactions. There’s a frequent requirement to connect between opening and closing a variety of ranges, which is what makes him a challenging character in terms of technique. But Takagi-san herself has been made to be a very appealing character, and when that is added on with Takahashi-san’s acting, I feel like I’ve had a “good time” being teased.

ー Have the two of you co-acted before?

Takahashi:  I believe this is our first time!

Kaji: Yeah, we hadn’t co-acted at all before this. And yet, all of a sudden, we’re playing characters that are this close! (laughs) That said, it’s not like we had an awkward distance since the recording of the PV, I feel like we get along quite well.

Takahashi: Really? Ahh, I’m glad to hear that… Thank you very much. It’s all thanks to Kaji-san’s personality. I mean, I’m teasing a senior, you know!? Not to mention, if I had to choose a side, I don’t usually belong to the “teaser” side…

Kaji: Not that I know much but, it does seem that way (laughs)

Takahashi: Usually, when it comes to my choice of words, I’m not the sort to be able to predict and manipulate people into responding a certain way, so it made me worry if someone like me can tease others successfully…

Takahashi: Kaji-san is always maintaining a comfortable distance which makes it easy to talk to him. No matter how many re-takes I’ve had to do, he would still watch over patiently and call out to me when I needed it. He really created a very comfortable atmosphere to act in.

ー Does Kaji-san usually get teased?

Kaji: Well, it depends on the person and situation. But I believe that the act of teasing, or rather, when people pick on you, it can be interpreted as a form of affection. This applies vice versa, people only tease people that they have taken a liking to, I believe that it’s because they’re looking forward to the response the other will give. If not, there’s no reason for them to take communication in the first place. That’s precisely why, the fact that Takagi-san is teasing Nishikata tells us that she has a liking for him. I’ve personally had to voice a considerable number of characters who tend to get teased, and although each of these characters are totally different, the essence behind each of their actions is reflected in Nishikata, which is why I felt that everything I’ve done up till now is being breathed to life through him.

ー Back in your school days, were you the type to tease girls?

Kaji: In my case… hmm… I probably haven’t changed much compared to now. If it was among a group of friends, I would tease anyone if the mood would be lifted when I do so, and I myself will get teased when the mood will be liven up when I am teased. I feel like it never really mattered if they were a girl or a boy. But above anything, what’s amazing about this story is, how a boy and a girl in their first year of middle school enter puberty… Takagi-san has already taken a step further, acting like an older sister, yet on the other hand, Nishikata feels like he still hasn’t gotten out of primary school. I believe it’s thanks to the author’s sensibility to have an eye for catching on this awkward yet exquisite stage of their lives.

ー It appears that the author himself never had a desire to be teased by girls.

Kaji: But in that case, leaving aside whether or not he desired it, it is impossible to draw anything like this if he never imagined it.

Takahashi: Did the author used to get teased?

ー Most likely… at the very least, that’s what we’d like to think.

Kaji: Still, isn’t the series filled with moments of “if I myself were to be teased as a boy, this is what will make my heart skip a beat!“? I’m always amazed at how he gets those moments right… If the author was a female, I bet he would have been a very skilled teaser. He would have been a witch (laughs).

ー Lastly, please give a message to the readers.

Kaji: I like the story about “Eraser” at the start of the first episode. It’s amazing how the show wasn’t made in a way to keep you wondering, “How does Takagi-san actually feel about Nishikata?”, but rather spell it out for the audience since the beginning that “she does like Nishikata.” I believe that even the people who are starting this series from the anime, so long as they watch the first episode, they will no doubt be drawn into the world of this story! Also, the thing that we ourselves were also really happy about, is that the story about the trio from “Ashita no Doyoubi” have also been included properly. I felt that the anime will truly convey the fact that it’s not just about Takagi-san and Nishikata, the series has also got many other attractive characters. I myself am also giving it my all at being teased, so it would be great if everyone else could witness firsthand Takagi-san’s skilled teasing in action. Please support it!

Takahashi: Although I said before that the time after recording the PV was the scariest, I guess this time after having recorded Episode 1 is also scary. It somehow makes my heart race. I may be feeling the pressure of becoming part of the production when I was only a fan before, but in order to convey the charm that once drew me into this story to the viewers, I hope I could voice a Takagi-san that wouldn’t be sorry to the series and the original comic… I hope I could say it in a more positive manner, but I’m doing my very best every episode, so it’d be great if you would watch it!

Kaji: You should be more confident! Haven’t you been pulling off those teasing really skillfully? (laughs)

Takahashi: I guess so~ I want to tease even more!! I would love to tease the readers and viewers too but…

Takahashi: That’s true. I believe you’ll see for yourself once you’ve watched it… but the charm, an ideal setting has been built up by a great team of staff members, therefore, by all means, please enjoy this one cour.

When I was translating ItsuSube’s Chapter 1, I was just reminded about how I bought the digital copy of this issue to read this interview at the start of this year cause I was so excited about the anime. To be honest I never really read it properly until now cause the digital version didn’t allow me to zoom in, so I could only take low-quality screenshots but still could hardly read the words. But this time, I decided to print it out and analyse the words slowly. It was quite worth it in the end so I’m glad I got to finish this. I believe they had a “からかい対談 (Teasing Talk)” part 2, so I might or might not translate that too (I haven’t bought that issue though). 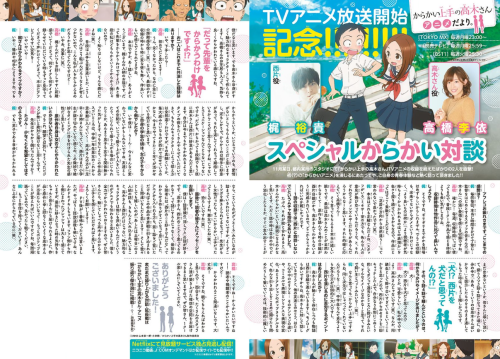